Can I read one book a day for an entire year? The answer, we’ve discovered, is NO. 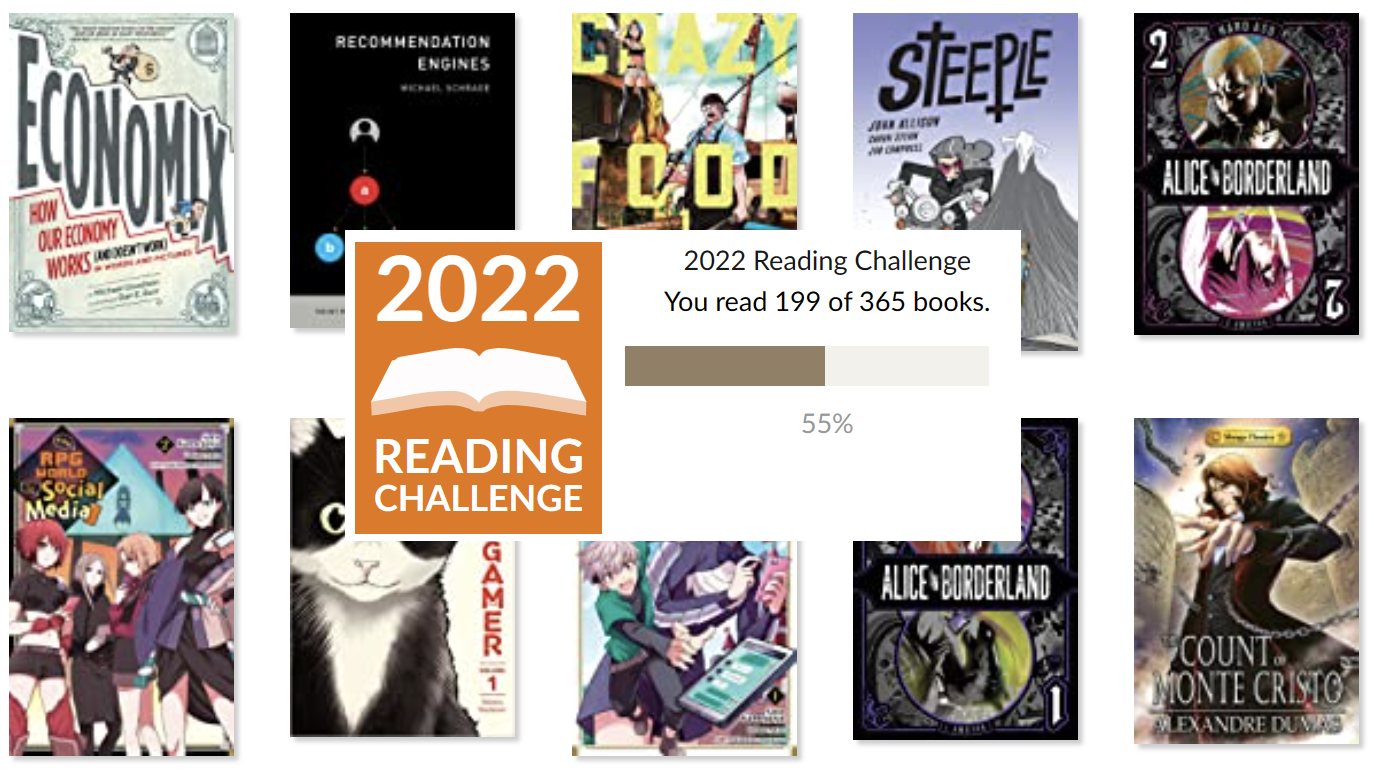 I’d need to be unemployed to accomplish this goal. 2022 was a very busy year, taking on lots of projects as well as moving 3000 miles. So this challenge fell off my radar faster than an egg-dude on a wall. The final count was 199 and most of it was manga and graphic novels, which I tend to read a lot more of, more than I usually record in these challenges. This year, instead of highlighting interesting patterns, I’m going to randomly list trivia of the content I read in 2022.

Everything that was not Manga

A solid book about Economics in comic book form. Recommended to all.

Good entry in a new series by Jason Shiga. Not as good as Meanwhile though.

Intro to running a game development company. A little spread out and doesn’t get enough into business ownership.

Great way of breaking down Kanji into smaller pieces that are easy to remember and recall.

Excellent adaptation and interpretation of some popular Kafka stories.

The Psychology of Money

Solid book on the topic. This should be required reading in schools for financial literacy. The biggest takeaway is that everyone has a different relationship with money based on their history with it.

Klara and The Sun

Read this for a book club. It was terribly mediocre, written by an accomplished author no less. More than anything, it made me question how the book-selling machine works. Is there a nefarious puppetmaster that determines what the public reads and loves? Or is the book actually as good as everyone claims and I (and a few others) don’t appreciate the beauty in its pages?

Yes, I admit that I recorded too many Manga in the challenge this year. It’s easy to consume and light on brain power. I’m going to try and read more of other types of content in 2023 in order to bring balance to the force.

I read more of this series. More books need to be published before I can proceed.

I think the series popped up on Xbox Gamepass and I decided to take the plunge into the manga.

As the Gods Will

Read it from start to finish. Doesn’t mean it was good; I just wanted to complete it.

I read up to the last published book. I suspect the series was prematurely canceled so not sure if I’ll get to finish it.

Why watch a Netflix Anime when you can read it faster?

Fort of the Apocalypse

Thrilling read and I’m close to wrapping it up. I’ll probably read the remaining books this year.

CLEARED! All remaining books have been read including the two endings. It’s strange for a Manga to have two endings and it’s well justified. One ending caters to the audience and the other caters to the wishes of the mangaka.

This series made me laugh so much. Unexpectedly hilarious.

Tatsuki Fujimoto is now in the mainstream. As such, I decided to revisit a prior work and found it absolutely gripping up to the point when the plot falls apart. I also read Goodbye Eri which was absolutely fantastic all the way through.

After finishing the anime a few years ago, I was curious to see how the story continued. Now I want to finish it out just to complete the series.

I didn’t think I’d enjoy this but I did. It seems to be another manga series that got canceled before it could conclude. I’m now utterly fascinated with the fine art of concluding a series before its time.

Other series include Manga Classics, Breaking the 10, Alice in Borderland, If the RPG World had Social Media, Dragon Eye, tons of Shonen Jump, etc.

And that’s it. See you next year?